At the University of Amsterdam, the ‘Join the Pipe’ water fountains proudly claim that “every water tap here means clean drinking water there.” This tagline, on a poster behind one of the fountains, is accompanied by a picture of brown-skinned children’s hands on a shining water pipe, presumably somewhere in Africa, though the picture does not say. The context is apparently unimportant. Scrawled in black sharpie across the bottom of the poster are the worlds “DECOLONIZE IMAGES”. 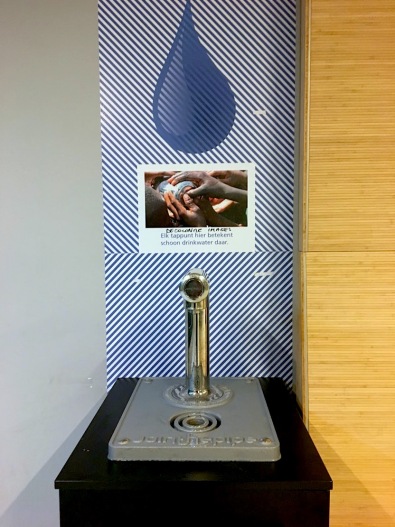 It’s a classic case of “poverty porn,” where poverty is fetishized in images and other forms of media, particularly by international aid organizations. These images perpetuate neo-colonial narratives and frequently ‘other’ and even dehumanize their subjects. While the time of colonialism may be (largely) behind us, the power structures that stem from it are still very much present today – even in our subconscious views on the world and the ways that it continues to be portrayed in dominant media and discourse. The African continent was amongst those most deeply pillaged by its colonial rulers, and it continues to be subjugated, underestimated and to have its narrative written by outsiders. The fact that this power relationship exists is a result of colonialism, and this image falls into that very trap: as so often happens, the nameless brown children in the picture are presented as passive subjects “there” getting help from people drinking water “here.” It is an easy rendering of a complex issue, an untrue and unfair view that robs agency and truth from the subjects of the story.

But surely the fact that these children are getting clean water is great, one might think. And yes, it may well be a materially beneficial project. But the narrative surrounding the project is making those benefiting from it seem one-dimensional and ‘other,’ reinforcing a divisive and dehumanising narrative all too common in nonprofit media. The fact that the project is materially beneficial should not mean that we are unable to criticize its methods and marketing approaches, or to push for them to do better.

Narratives support broader power imbalances, so through narratives we can either choose to further entrench existing neo-colonial ideas of power and poverty, or we can strive to challenge these dominant narratives and be part of creating a shift in our world’s collective imagination of countries, people and power that rejects neo-colonial power imbalances. Perhaps by changing the narrative, we can counter this imbalance.

We have a few ideas, all of which we do our best to use throughout our own media. However, I can’t emphasize enough that this is not a checklist, and these ideas are far from exhaustive. Decolonizing media and shifting the discourse within non-profit media is an ongoing discussion that has to remain critical of itself in order to continue being productive and genuine.

As one of educate.’s founders, creating an organisation with an intentionally anti-colonial culture (or in other words, a culture where communities and local leaders have real agency and leadership over projects, and where our role is to support those who truly understand what their communities need) is a core reason that I do this work. However, I know that this is an ongoing learning process and that there is a certain irony in writing about this topic as a white woman – though I do believe it is nonetheless valuable and important to engage with. As a team, discussions about our philosophy and how we enact this on a practical level are ongoing, and include deep discussions between our European and Honduran teams on these topics. We are lucky and have worked hard to create a team culture where we can challenge each other and push ourselves to reflect critically as a team in order to be as holistically ethical as we can.

Today, I want to focus on the media side: how we work to oppose the neo-colonial power relationships and narratives of the international aid sector throughout our media. We know that the ways in which we communicate our work and present the people involved – including everyone from directors to project leaders to the children at the schools we work with – matter.

1. Challenge your own assumptions and biases.

If you are in a position of power and/or privilege, creating any kind of media about a person or population in a less powerful and/or privileged position, changing narratives must start with you.

As a white woman who frequently finds myself in this position, I am constantly working to unlearn my own biases and prejudices. Doing so requires listening and learning – a lot, and continuously. If, like me, you are white (and chances are that if you work in the non-profit sector, you are – over 90% of the UK’s non-profit sector is white), then learning about whiteness, white privilege, colonial history and its modern implications is crucial to understanding your own positionality, power and responsibility. Read, talk, discuss, and be open to criticism.

Here a great article to start off with: What Role can Privileged White People Play in International Development?

2. If you can, hire local photographers and storytellers!

Closeness to a subject matter through personal lived experience provides an unmatchable nuance to a topic. Unfortunately, our budget doesn’t allow us to hire a local communications director on even a part-time basis (100% of educate.’s team are volunteers). But if you can, hire a local who can tell the stories of their own community, instead of getting an outsider who will often (intentionally or not) impose their own narrative.

(The rest of this list is based on the assumption that, as for us, this either isn’t possible, or isn’t currently the case.)

Getting informed consent to take someone’s photo or share someone’s story should be a no-brainer, but if you are really committed to challenging narratives around power relationships, going deeper is essential. There is a huge difference in telling another person’s story from your own perspective and really engaging with people so as to understand the nuance and complexity of a situation and a person. By building real relationships, you can engage with depth and compassion, and avoid (intentionally or unintentionally) positioning people as passive subjects. Get people’s input, allow people to shape and tell their own stories, and build relationships that are deep and ongoing.

Ultimately, systems need to change. But by building genuine relationships with people that are built on a foundation of mutual trust and respect, you can take photos and tell stories that centre on who a person is rather than on the things that they lack.

4. Champion the work of local individuals – don’t centre yourself.

A few months ago, a controversy emerged around a case involving British celebrity Stacey Dooley who was centred in a Comic Relief film to tell the stories of the Ugandan beneficiaries of Comic Relief’s work, arguably perpetuating the deeply harmful trope of the “white saviour.” Guardian writer Gaby Hinsliff sums it up well, saying “it’s clear the subjects of Comic Relief’s films don’t need celebrities to tell their stories.”

If you are writing about/photographing/filming people from a different country, race, culture or community than your own – don’t centre yourself. White people can of course be involved in the development sector – and they are – but we are not and must not be positioned as the heroes of these stories.

Instead, champion the local individuals who are doing work in their own communities!

People have agency. It doesn’t matter who you are talking about, agency is not something “given” to anyone by an aid organization or NGO. The job of a storyteller working in this sector is simply to focus on that agency. Instead of presenting individuals as “recipients” or “beneficiaries” – positions that demonstrate passivity and strip away agency – focus on what people are doing.

This is a discussion of charity versus dignity, but it is also – again – about colonial history and race. The systems at play cannot be ignored, and must be actively tackled.

An example at educate. are our scholarship students – highly driven and ambitious young people who we support with university scholarships, all of them the first in their families to go to university, and each as audacious and passionate as the next. These students are far from being passive recipients of support, they are dreamers and leaders and active role models in their communities, and they deserve to be presented as such.

6. Let subjects tell their own stories.

Where possible, stories should be told by people, instead of being told about them.

For example, let a person choose what kind of photos they would like presented of themselves, and to see any images of themselves that are going to be published in advance so they can approve or reject them. Let people write and film and share their stories themselves, shaping their own narratives. Who is behind the camera/screen matters enormously.

We try to make spaces for people to tell their own stories: scholarship students writing about their experiences, and Honduran activists contributing to our blog to share their experiences as part of the migrant caravan or as a member of the black and indigenous Garifuna minority.

Again, as a white woman who runs most of educate.’s digital media, I try my utmost to ensure that our platforms are used to amplify Honduran voices, and that our displayal of our work and the people involved centres on agency and dignity.

Of course, it goes without saying that tangible, structural change actually has to happen in the way organizations work, not just in the way that they present themselves. Power relationships need to shift and decision-making power needs to go to those who most fully understand the needs of their communities – only with these kinds of changes will the neo-colonial structures of the aid sector be truly challenged.

But media and marketing has a huge impact on the wider public’s perception of a place and a people, and by challenging stereotypes we can also challenge the notion of “aid”. And so, I believe this aspect of the broader picture remains deeply important.

We would love to hear from you. What are your thoughts? How can we go further? What can we still improve? Leave your comments below!