Stephanie Marie Chevez is currently studying medicine at the Catholic University of San Pedro Sula on an educate. scholarship.

Her parents are farmers in the small village of Guaymon in the north-west of Honduras, but during the week, Stephanie lives with her aunt in the nearby city of El Progreso so that she can catch the bus in to university every day.

Though her parents live a humble life, they have always prioritised education for Stephanie and her sister, and almost all the family’s money has been used to send them to a bilingual (Spanish-English) school. Stephanie graduated high school in July 2016 with the third highest grades in her year and with dreams of becoming a doctor. However, given the family’s financial situation, they were struggling to come up with the funds to cover the costs of tuition. With educate.’s support, she is now studying medicine and receiving excellent marks in her classes, and even taking French as an additional elective!

Stephanie is the first in her immediate family to go to university. Honduras has the highest economic inequality in Latin America, but by allowing students like Stephanie to go to university, we are making small but significant changes to this statistic. Stephanie will go on to become a doctor, changing not only the lives of her family and future patients, but also changing norms in Honduran society. 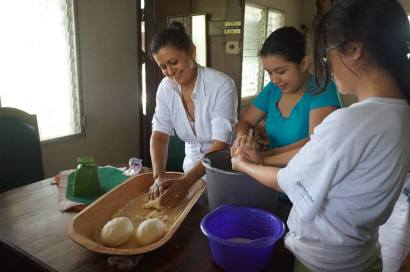 The scholarship Stephanie receives covers her tuition fees, leaving her family with only the expenses for books and transportation. This collaborative approach ensures continuous commitment on both sides.

When Stephanie is not studying at university, she volunteers on medical brigades, helps her parents on the farm, reads in both English and Spanish, and spends time with her younger sister, Farida.

You can support our scholarship programme by donating here.